Indonesia is the world's fourth most populous country with about 261 million people in 2016 (UN, DESA, 2016). Total land area is about 1.9 million km2. About 52% of total harvested area of food crops (14 million ha) is located in Java. Indonesia is the third and fifth rice and maize largest producing country, respectively (GRiSP, 2013; Ministry of Agriculture, 2015). Average rice and maize yields are 5.2 and 4.9 tons per harvested hectare, respectively (Table 1). Average yields have increased during the past two decades at a rate of 37 (rice) and 147 (maize) kg ha-1 y-1. GYGA-Indonesia focuses on irrigated and lowland rainfed rice and irrigated and rainfed maize. Upland rainfed rice was not included in our analysis because it accounts for only 5% of total rice production in Indonesia.

The tropical and wet climate of Indonesia is favorable to grow multiple crops in the same piece of land within the same year. Average temperature is around 26-280C, with total annual rainfall ranging from 1,000 mm in East Nusa Tenggara and Palu Valley to more than 3,000  mm in most parts of Sumatra, South Kalimantan, West Java, Central Java, and South Sulawesi. Dominant agricultural soils are Inceptisols, especially in Java. Other soils include Ultisols (lowlands in West Java, Central and South Sumatra, and parts of Kalimantan), Vertisols (Central and East Java, Bali, West and East Nusa Tenggara), and Oxisols (Sumatra, parts of West Java, and Kalimantan).

Cropping systems are very diverse and include different ecosystems (upland, lowland, swamps, tidal), and water regimes (rainfed and irrigated). Irrigated systems are most common for lowland (flooded) rice systems. Cropping intensity (for annual crops) varies from 1 to 3 crops per year. An example for maize- and rice-based cropping systems in Indonesia is shown for Central Java and Yogyakarta (Figure 1). In this region, October coincides with the onset of the rainy season for most areas and the rainy season continues until the end of March. 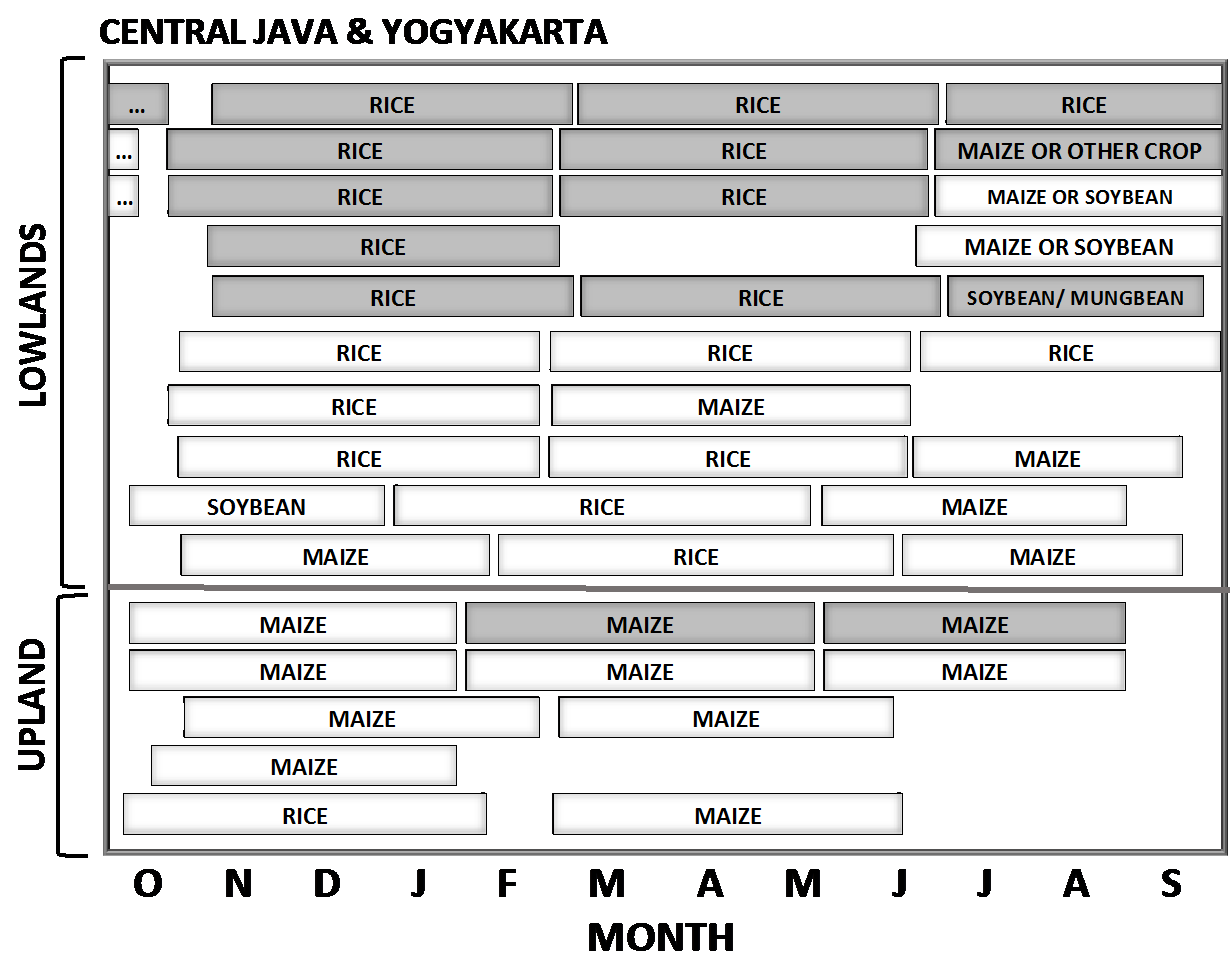 Selection of buffers and source of weather data

A total of 36 buffers were selected for Indonesia. These buffers account for 99% (irrigated rice), 94% (lowland rainfed rice), 58% (irrigated maize), and 89% (rainfed maize) of cropland area. These coverage values were calculated considering the climate zones where the selected buffers where located. We used the national meteorological station network of the Meteorology Climatology and Geophysics Agency (BMKG) as the main source of weather data. Daily weather data were available for the last 10-18 years for 28 buffers, including daily solar radiation, maximum and minimum temperature, humidity, and precipitation, but no daily weather data existed for 8 buffers; hence, NASA-POWER were used to generate weather data for them (NASA-POWER; NASA, 2012). Quality control and filling/correction of the weather data was performed based on correlations between the target Reference Weather Stations (RWS) and one to two adjacent weather stations following van Wart et al. (2013). Number of corrections/filled data was always lower than <3% for all variables. 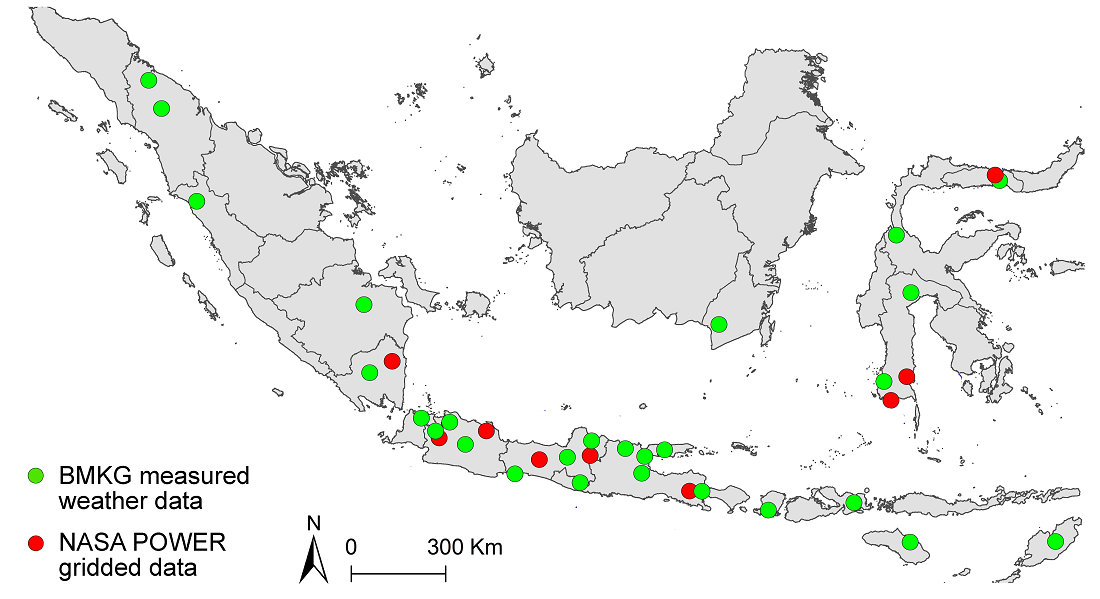 Selection of dominant soils in each buffer

Soil map was overlaid with the buffer zones to identify the dominant agricultural land area. Lowland area was identified based upon distribution of the lowland rice area. The 1:5,000 scale rice field maps used to calculate the lowland area were developed by the Data and Information Center Ministry of Agriculture (PUSDATIN, 2011); Director General Facilities and Infrastructure Ministry of Agriculture (Ditjen PSP, 2013). The lowland rice areas were divided into irrigated and rainfed lowland. The rice area outside Java was only classified as lowland. Upland areas was identified by using Landuse Map developed by the Indonesia Ministry of Land and Spatial Planning, at scale 1:250,000 (ATR, 2012). Soil texture, soil depth, and slope for dominant soil identified in each buffer were derived from Indonesian Center for Agricultural Land Resources Research and Development (2013)

Annual data on average farmer yields and harvested area were retrieved from the time period between 2010 and 2015(https://www.bps.go.id). Regency-level data on harvested area and average yield were retrieved for maize in lowland rice. For each buffer-year-crop, we estimated average farmer yield by averaging the yields reported for those regencies that overlap with the location of the buffers, weighted by the harvested area reported for each regency. For this calculation, we only included regencies that have >30% of their total area inside a given buffer zone (except for a few cases in which all regencies have <30% area inside the buffer). Because GYGA requires yields disaggregated by water regime, we estimated yields and areas for irrigated and rainfed lowland rice and maize based on the official statistics together with information obtained from local agronomist and extension agents. For each buffer and year, we estimated average on-farm yield for each crop and water regime.

Management practices for each RWS buffer zone were retrieved from local agronomists and extension agents. Requested information included: dominant crop sequences, ecosystems (upland/lowland/swamp/tidal), water regime (rainfed/irrigated) and proportion of each of them to the total harvested area, average sowing/transplanting dates, dominant cultivar name and maturity, and actual and optimal plant population density. Reported dates of sowing in the Atlas correspond to mid-point of the (20-day) sowing window reported by country agronomist.

Simulations of widespread varieties for each region were performed using Maize-Hybrid (Yang et al., 2004, 2017) for maize and ORYZA V3 (Li et al. 2013, 2017) for rice. Models were calibrated for Inpari 32 (rice) and Pioneer 21 (maize) cultivars using available experimental data from Indonesia (Witt et al. 2006; Pasuquin et al. 2012, 2014; Agustiani et al., in preparation). These two cultivars are amongst the dominant ones across Indonesia. While local rice varieties are still important in some buffers (e.g., South Kalimantan, Lampung), experimental data to calibrate model parameters for these varieties are not available. Likewise, we did not attempt to simulate yield potential for crop systems where maize is grown with other crop species (cassava, beans, peanuts, vegetables) as intercrops at the same time on the same piece of land. Indeed, intercropped maize is not common in Indonesia and can only be found in the uplands of some regions of Central Java and East Nusa Tenggara (total of 5 buffers). For these few sites, simulations of water-limited yield potential assumed a uniform pure maize stand. All simulations assumed no limitations to crop growth by nutrients or biotic stresses.

For irrigated crops, we assumed no water limitation, while simulation of rainfed crops considered rainfall and soil properties influencing the soil water balance. Despite technically not irrigated, lowland rainfed rice in Indonesia still remains flooded (or at least under soil saturation) during most of the growing season; hence, to a large degree it can be considered non-water limited (Haefele and Bouman, 2009). Still a portion of the lowland rainfed rice area is drought prone, especially at late crop stages (Boling et al., 2007, 2008). There is high uncertainty in relation with groundwater depth across sites, seasons, and landscapes, and its influence on lowland rainfed rice yields (Boling et al., 2007, 2008). Likewise, if feasible, farmers would pump water into lowland rainfed rice fields to keep them flooded during rain-free periods. Given the range of possible scenarios and associated uncertainties, we simulated water-limited yield potential for lowland rainfed rice (including tidal and swampy rice) for two scenarios of groundwater depth during the entire crop cycle (shallow [10 cm] and deep [150 cm]). These two scenarios basically portray non-water limiting (shallow scenario) and drought-prone (deep scenario) environments. For these simulations, we assumed a puddled clay loam soil and bund height of 25 cm. We also assumed that each groundwater scenario accounts for an equal (50:50) share of the lowland rainfed rice area in each buffer. On average, we found a small difference in Yw for lowland rainfed rice between the two scenarios (ca. 0.5 t/ha), which is consistent with the small difference in average farmer yield between lowland rainfed and irrigated rice (ca. 0.8 t/ha). In the case of irrigated maize, crops receive partial (deficit) irrigation at a few RWS (Lombok and Sumbawa), with irrigation water insufficient to keep the crop fully irrigated during the entire crop season. Given the uncertainty on amount and timing of irrigation, we simulated these crops as non-water limited, recognizing that this would lead to a slight overestimation on yield potential and yield gap.