Bangladesh has a primarily agrarian economy, although agriculture's contribution to total GDP has been decreasing in recent years. Despite this trend, agriculture remains the largest sector of the economy comprising about 19% (including livestock) while the crop sector is 13% of the country's GDP; in addition, the agricultural sector employs around 26% of the total labor force (AIS 2013, and BBS 2012). The performance of this sector has large impact on major macroeconomic objectives like employment generation, poverty alleviation, human resources development and food security.

The total land area is about 14.84 Mha of which 3.74 Mha (25% of total) is not available for agriculture due to use for urban areas, industrial buildings, rural homesteads, roads and other infrastructure. Although net cultivated area declined to 7.84 Mha in 2011 from 8.85 Mha in 1985, the total harvested crop area increased to 14.95 Mha due to increases in annual double-, triple- and even quadruple-cropping on the same piece of land. Average cropping intensity was 1.9 in 2010-11. Land utilization statistics for Bangladesh are provided in Table 1.

Rice, wheat, maize, potato, pulses, and oil seeds are major food crops in Bangladesh. While rice is the primary staple food and the most important crop, wheat and maize are of second and third importance. Pulses and oilseeds are important crops in the context of supplying plant-based proteins for rural people. Jute and sugarcane are important cash crops. Average yields, cultivated area, and production of major food crops or the last six years (2006-2012) are shown in Table 2.

The geography of Bangladesh is dominated by flood plains of the Ganges, Brahmaputra, and Meghna rivers. Thirty agro-ecological regions and 88 sub-regions have been classified on the basis of physiography, soil characteristics, depth and duration of seasonal flooding, length of crop season and growing period, and seasonal temperature. Soil fertility status of these regions varies considerably. Individual farmers have fragmented the land into small parcels causing wide variation in the management of each piece of land. This leads to the large variation in the soil fertility level even between adjacent fields.

The Soil Resources Development Institute (SRDI) has identified about 500 soil series in Bangladesh. All have been mapped by the SRDI through a reconnaissance soil survey carried out during 1965 and 1975. The resulting soil series have been described to be consistent with the FAO-UNESCO soil units of Fluvisols, Gleysols, Histosols, Planosols, Luvisols, Cambisols and Arenosols. According to the USDA soil taxonomy, these soil series are Entisols, Inceptisols, Histosols, Mollisols, Ultisols and Alfisols.

A total of 21 general soil types are recognized in Bangladesh. These general soil types give a broad generalization of soil characteristics. Each general soil type includes several soil series, developed in more than one kind of parent material and may include a wide range of chemical and physical properties. The objective of this scheme is to classify soils with broadly similar characteristics so as to provide an overview of soil conditions for the country. Table 3 gives the area under various soil types.

The climate of Bangladesh is generally sub-tropical in north to hot humid in the south. Southwest monsoon influences the climate during June to October. In winter from November to March, the climate is controlled by the northwest monsoon. The summer is hot and humid and the winter is mild. Highest monthly average maximum temperature of 36.3°C is recorded in April and the lowest monthly average minimum temperature of 9.5° C is recorded in January. Ranges for maximum and minimum temperatures vary within the range of 1.6 to 9.5 °C   and 1.4 to 5.6°C over the country.  Annual rainfall ranges from <1500 mm in the dry northwest region to over 5000 mm in the wet northeast region. The country's average annual total rainfall is 2428 mm. The country is vulnerable to many environmental hazards, including frequent floods, droughts, cyclones and storm surges that damage life, property, and agricultural production.

Agriculture in Bangladesh is predominantly based on smallholders with about 80% of the farmers cultivating less than one hectare. Agriculture is characterized by traditional farming methods using draft animals for ploughing and hand hoe for land preparation and sowing. Small-scale mechanization is increasing through use of two-wheeled tractors for tillage and power threshers for paddy rice and wheat. Irrigated area has expanded in recent years. In 2010-11, total irrigated area for boro rice, aman rice and wheat were 4.58 Mha (95% of total boro rice), 0.69 Mha (12% of total aman rice), and 0.33Mha (91% of total wheat), respectively. Irrigation area increased by 10%, 3%, and 6% in 2010-11 in comparison to 2009-10 for boro rice, aman rice and wheat, respectively.

Boro rice and rabi (winter) maize crops in Bangladesh are either fully or partially irrigated, while aman and aus rice and kharif-1 (spring) maize are predominantly rainfed, with some crops applied with partial irrigation. Wheat is also predominantly grown with full irrigation (~80%), with remaining 20% under either partial irrigation or strictly rainfed. Despite this, the SPAM database reports a significant fraction of the harvested area for rice and maize to be under rainfed conditions. We suspect that most of the SPAM-reported rainfed area for rice and maize crops corresponds to partially-irrigated crops. Hence, we used the sum of SPAM-reported rainfed and irrigated harvested areas for selection of reference weather stations buffers and up-scaling of yield potential and yield gaps estimates for rice and maize.

Ground water is the primary source of irrigation, especially for boro rice cultivation (BBS, 2012). Intensive abstraction for irrigation (25–75 wells per km2 of irrigated land) occurs in many areas of northwestern Bangladesh and began during the late 1960s to early 1970s with the installation of deep (depth >80 m) tubewells (DTWs) by the Bangladesh Water Development Board. Initially, irrigation from groundwater was provided by these DTWs in addition to surface water irrigation with low-lift pumps and other traditional methods. During the 1980s and 1990s the government, with support from international organizations, installed thousands of shallow (depth <80 m) irrigation tubewells (STWs) to utilize large quantities of groundwater at relatively shallow depths. Withdrawals exceed recharge rates, however, due to excessive irrigation such that groundwater is declining by 0.01-0.5 m/yr in many areas in the northeast, northwest and southwest where boro rice is intensively cultivated. Thus the current irrigation practices for agriculture, especially for rice farming, are not sustainable, and is a serious concern for future food security in Bangladesh.

Cropping systems are highly diverse, intensive and complex in Bangladesh. The predominant cropping patterns are annual double- or triple crops of rice-rice, rice-wheat, rice-maize, potato-rice-rice, wheat-rice–rice, wheat-mungbean–rice, mustard-rice-rice and rice-rice-rice. Rice is grown in annual single-, double-, and triple-cropping patterns in the boro, aus, and aman seasons depending on inundation and land topography.  In recent years, the area under rice-wheat and rice-rice cropping patterns is declining while that under rice-maize is increasing among farmers who have livestock or fish production enterprises. In the northern region, maize is also being introduced as an intercrop with one or more other crops such as vegetables (potato, red amaranth, sweat gourd). Groundwater decline and hence scarcity of irrigation water is also another factor for decline of boro rice area and increase of maize area due to reduced irrigation requirements for maize.

A total of 11 reference weather stations (RWS) were selected in Bangladesh following the protocols described by Grassini et al. (2015) and van Bussel et al (2015), with 5 RWS for irrigated maize, 7 RWS for irrigated wheat, 9 RWS for irrigated rice and 9 RWS for rainfed rice. This led to a good coverage of these crops as 60 to 80 % of national harvested areas felt within RWS buffer zones and 70 to 90 % within the selected climate zones (Table 4). All RWS had measured data for 15+ years, except one for which weather data were propagated according to the method described in Van Wart et al. (2015) in order to fill important gaps (but still <10% of days) in daily Tmin and Tmax and missing solar radiation.

Major soil types (i.e. 3 to 5 dominant soil types) within rainfed rice RWS buffer zones were retrieved from the ISRIC-WISE soil database (http://www.isric.org/). The proportion of each major soil type was calculated and used to upscale the results.

In order to reach a compromise between (i) best representing how a given crop is produced in terms of weather, soils and cropping systems, (ii) limit the number of simulations to be run, the following assumptions were made about rice-based cropping systems in Bangladesh: 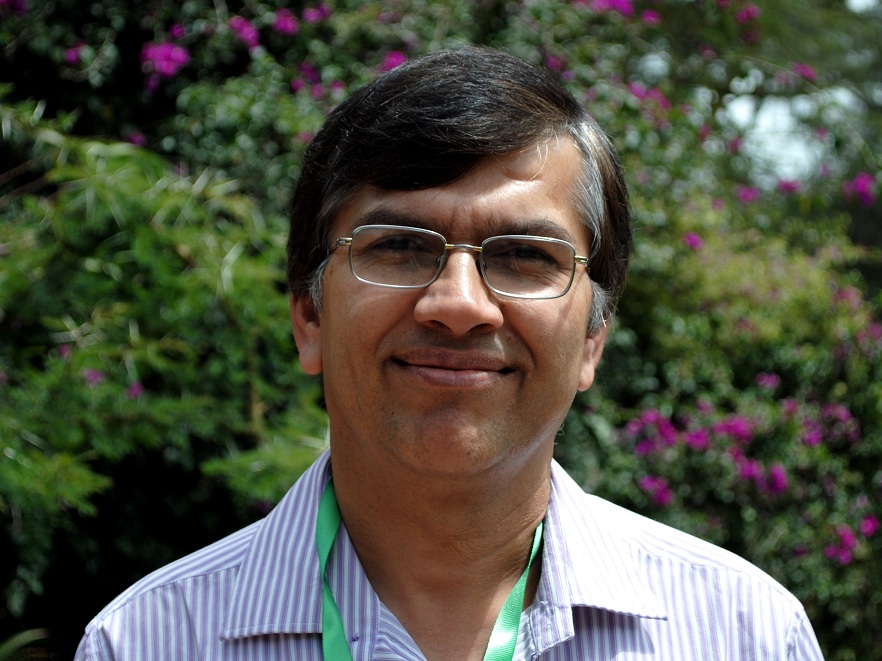