The land use pattern of India indicates that forests account for an area of about 70 million ha by 2009-10 out of the total geographical area of 328.7 Mha (Table 1).  Total cropped area, net sown area, and cropping intensity (number of harvested crops per year) in India during the same period were192 Mha, 140 Mha and 1.4 respectively. Similarly, net irrigated area of the country was 63.2Mha.Rice, wheat, pearlmillet, sorghum, and maize are the main cereal crops in India and cereals as a whole account for 100 Mha (52%)of total cropped area, whereas pulses and oilseeds account for12.8 Mha(7%) and 27.2 M ha (14%) respectively (Fig. 1). The analysis of existing cropping pattern in India revealed that rice and wheat occupy largest share of total cropland area.Area under rice crop increased from 30.8 Mha in 1950-51 to 44.0 Mha in 2011-12, whereas wheat increased from 9.8Mha to 29.8 Mha during the same time period. 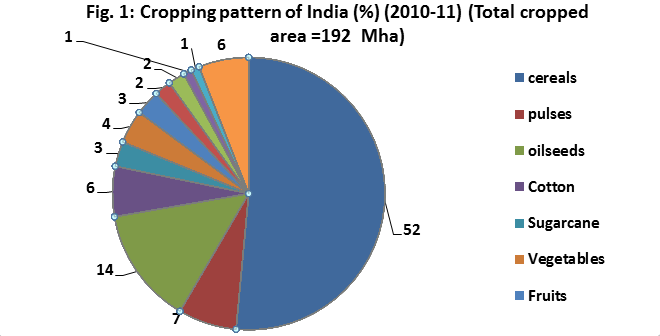 Grain crops contributed about 127 Mha (59%) of the gross cropped area of the country. Rice and wheat occupied 22% and 15% of the total net cultivable area in India. Relative to cropping patterns, rice occupies the largest cultivable area during Kharif (June to October) season whereas wheat occupies largest cultivable area during Rabi (November to March) season. Pearl millet, maize and sorghum occupied about 5%, 4% and 4% of total croplandarea in India respectively during 2009-10. Though the area under maize exhibitedan increase from 3% in 1990-91 to 4% in 2009-10, the area under pearlmillet and sorghum declined significantly during the same period, from 6% to 5% (sorghum) and8% to 4% (pearl millet).

India has diverse climates, including tropical wet and dry, subtropical humid, semi-arid, arid, tropical wet and alpine climates. India is divided into 15 agro-climatic zones (Fig.2) based on similarity in climate and soils as follows:

Rice-wheat is the major cropping system in India and lot of diversity exists in cropping systems in different districts located in various agro-climatic regions of India (Fig.3). 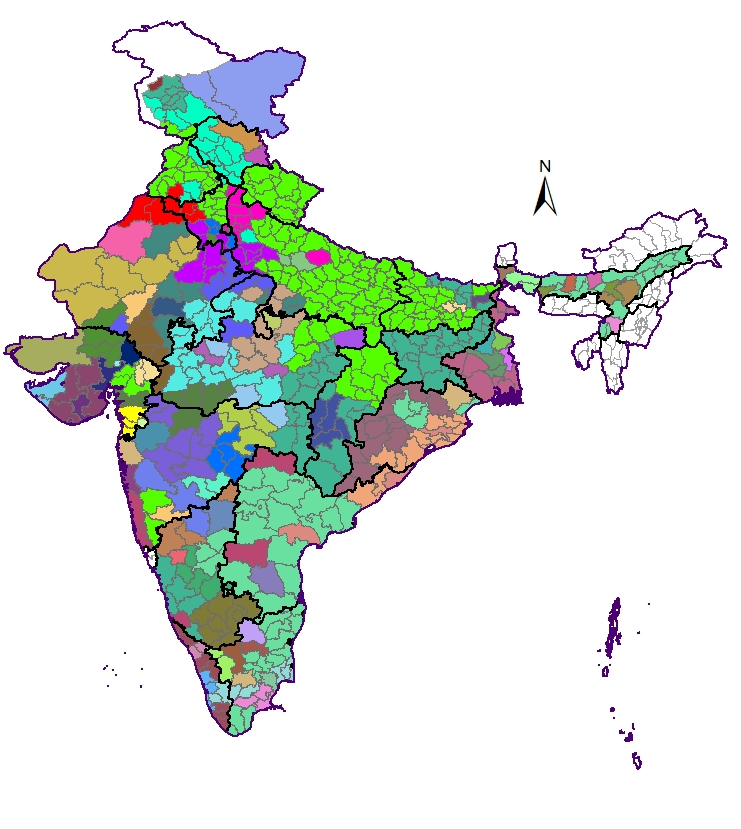 The major soil order present in India is Inceptisols (40%) followed by Entisols (28%), Alfisols (14%) and Vertisols (9%) (NBSS&LUP Staff, 2015). Aridisols (4%) and Ultisols (3%) are other minor soil ordersthat exist in the country. Significant features of current Indian agriculture are: (i) Small and scattered land holdings, (ii) about 46% of the total cropped area is under rice and wheat crops (rice in both kharif and rabi seasons and wheat in rabi season), (iii) subsistence agriculture dominates in several agro-climatic zones, (iv) significant area after rice harvest is left fallow in eastern India, (v) the productivity of sorghum and pearl millet is low in rainfed ecosystem, (vi) mustard and groundnut are dominant oil seed crops, (vii) redgram, bengalgram, blackgram and greengram are prominent pulse crops, (viii) food security in India is severely influenced by climate change (Brahmanand et al., 2013) and climate resilient agricultural practices will play vital role in reducing the yield gaps of the crops in the region.

Based on crop harvested area distribution and the agro-climatic zones defined for India, a total of 20 (irrigated wheat), 13 (rainfed wheat), 16 (irrigated rice), 14 (rainfed rice),18(maize), 26 (sorghum) and 30 (pearlmillet) reference weather stations (RWS) were selected following the protocols described by Grassini et al. (2015) and van Bussel et al (2015). The efforts were made to strike a balance between coverage of significant crop harvest area of selected crops and diversity of climatic conditions existed in different reference weather stations in India. The crops like rice and wheat are grown both in rainfed and irrigated conditions whereas maize, pearlmillet, and sorghum are mainly grown in rainfed conditions.

District-level data on actual yields for maize, sorghum and pearlmillet were retrieved from the Government of India source i.e. Web based land use statistics information system of India (http://lus.dacnet.nic.in/). A weighted average yield was calculated at the RWS level based on the actual yield (3 years were used from 2007-08 to 2010-11) reported for the districts located within the RWS buffer zone and the relative contribution of each district to the total crop harvested area in the RWS buffer zone.For rice (irrigated and rainfed) and wheat (irrigated and rainfed), actual yields were retrieved from SPAM2005(http://mapspam.info).Maps of harvested area for all crops were retrieved from SPAM2005.

The major soil types/soil orders of India present within RWS buffer zones were identified based on the data collected from national research institutions and bureaus under Indian Council of Agricultural Research such as ICAR-National Bureau of Soil Survey and Land Use Planning, Nagpur, Maharashtra, India and ICAR-Central Research Institute for Dryland Agriculture, Hyderabad, Telangana, India (ICAR-NBSSLUP, 2002;http://www.nbsslup.in/ and ICAR-CRIDA, 2015; http://www.crida.in/).  The data on soil texture, rootable soil depth, and slope used in the management sheets and simulations were also collected from these sources.

Simulations of rice and wheat for each region were performed using APSIM. The simulations of sorghum and pearlmillet for each RWS were performed using WOFOST (Boogaard et al., 1998) and maize yield was simulated using Hybrid Maize (Yang et al., 2004). Sowing dates were dynamically simulated for each year based on reported sowing windows for each crop and location, with the exact date of sowing determined from the onset of rainfall as described inWolf et al. (2015).Separate simulations were performed for potential (Yp, for irrigated crops) and water-limited conditions (Yw, for rainfed crops). 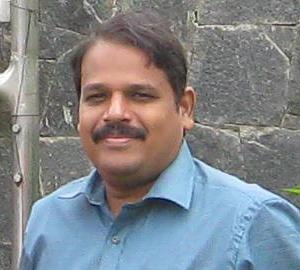