Iran is the world's 18th-most-populous country with about 81 million inhabitants. With a land area of 1,648,195 km2, Iran is the 17-th largest in the world.  The country lies between latitudes 24° and 40° N, and longitudes 44° and 64° E in the southeast of Asia. Almost 60 percent of the country is dominated by mountainous area, and the rest consists of deserts and arid lands. Iran includes two major mountain systems, named Alborz and Zagros (Fig. 1). These mountain ridges which run east and southeast from the northwest corner of the country, surrounding two uninhabited deserts, Dasht-e Lut and Dasht-e Kavir. 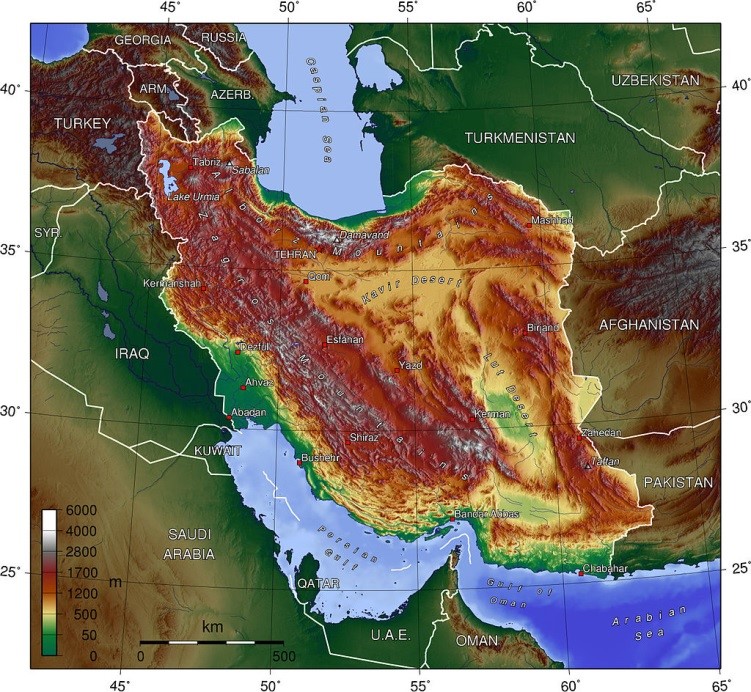 Fig. 1. Topography of Iran (from Wikimedia).

Table 1. Distribution of cultivated land (ha) between different plant groups and irrigated and rainfed systems. Where double cropping is practiced, the land under the first and the second crop has been summed up. Greenhouse area is 5,864 ha.

Table 2 includes area, production and average yield of different crops in Iran. Crops covered by GYGA-Iran are marked by asterisk. Of the covered crops, wheat, barley, rapeseed are grown as both irrigated and rainfed. More than 90% of chickpea and lentil are produced under rainfed conditions, while alfalfa, rice, maize (for grain and silage), potato, common bean, sugar beet, cotton and soybean are mainly grown under irrigated conditions in the country.

*Covered by GYGA-Iran so far.

Spatial distribution of annual precipitation and air temperature are presented in Fig. 2 and 3. Fig. 4 presents climate zones of Iran based on GYGA-ED climate classification method. 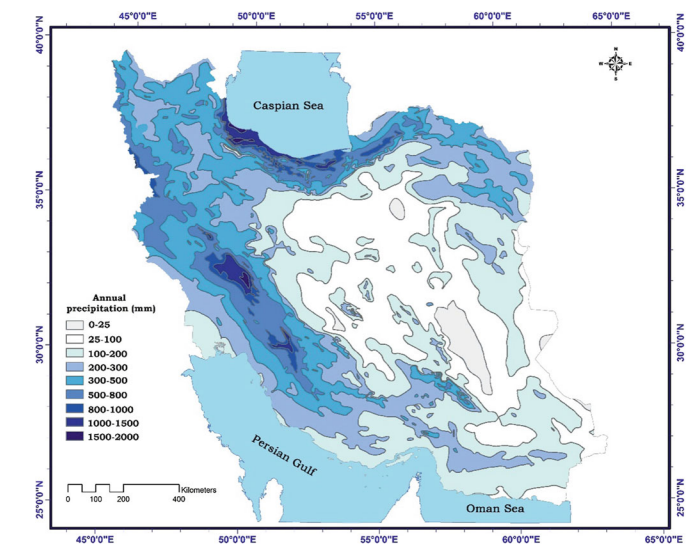 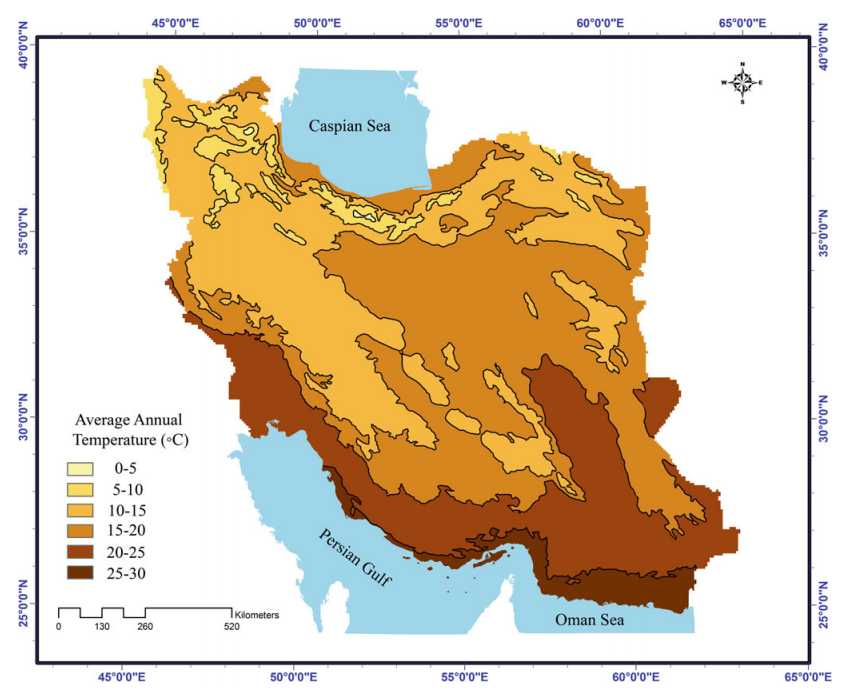 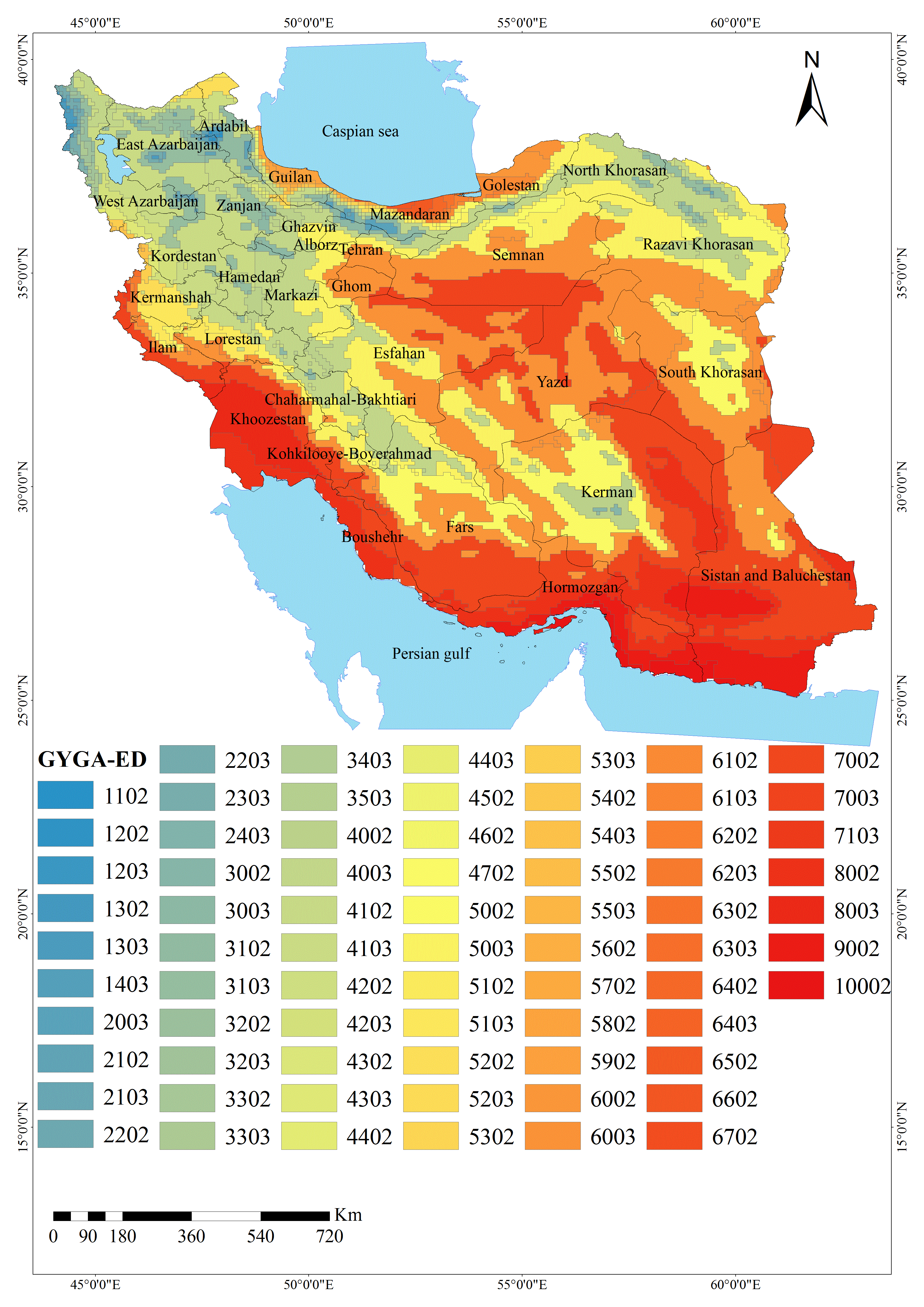 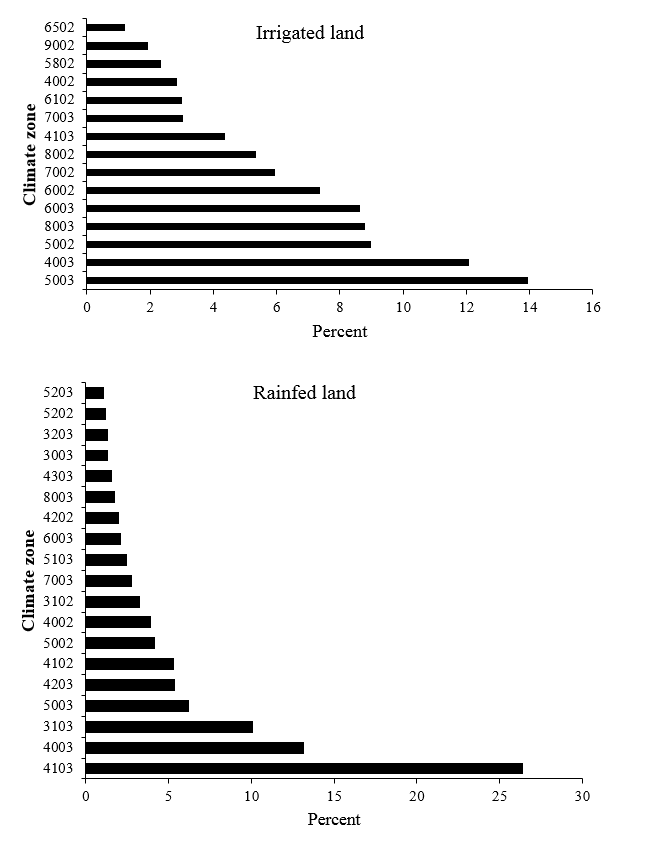 Selection of reference weather stations (RWS) and buffer zones for each crop was based on GYGA protocol as described by Van Wart et al. (2013) and van Bussel et al. (2015). The number of climate zones, percentage coverage (based on climate zone) and the number of RWSs for each crop are shown in Table 3. Weather data were quality checked for extreme or missing values and unusual changes using WeatherMan utility of DSSAT (Jones et al., 2003). Solar radiation data for all RWSs were calculated from sunshine hours using this utility software. For 23 weather stations, it was needed to generate few years of weather to have a complete data set for simulation of potential yield (Appendix I), which was again performed using WeatherMan. Generated weather consisted 6.5% of all weather data used. This percentage was different for each crop, but was never more than 10% for a single crop. 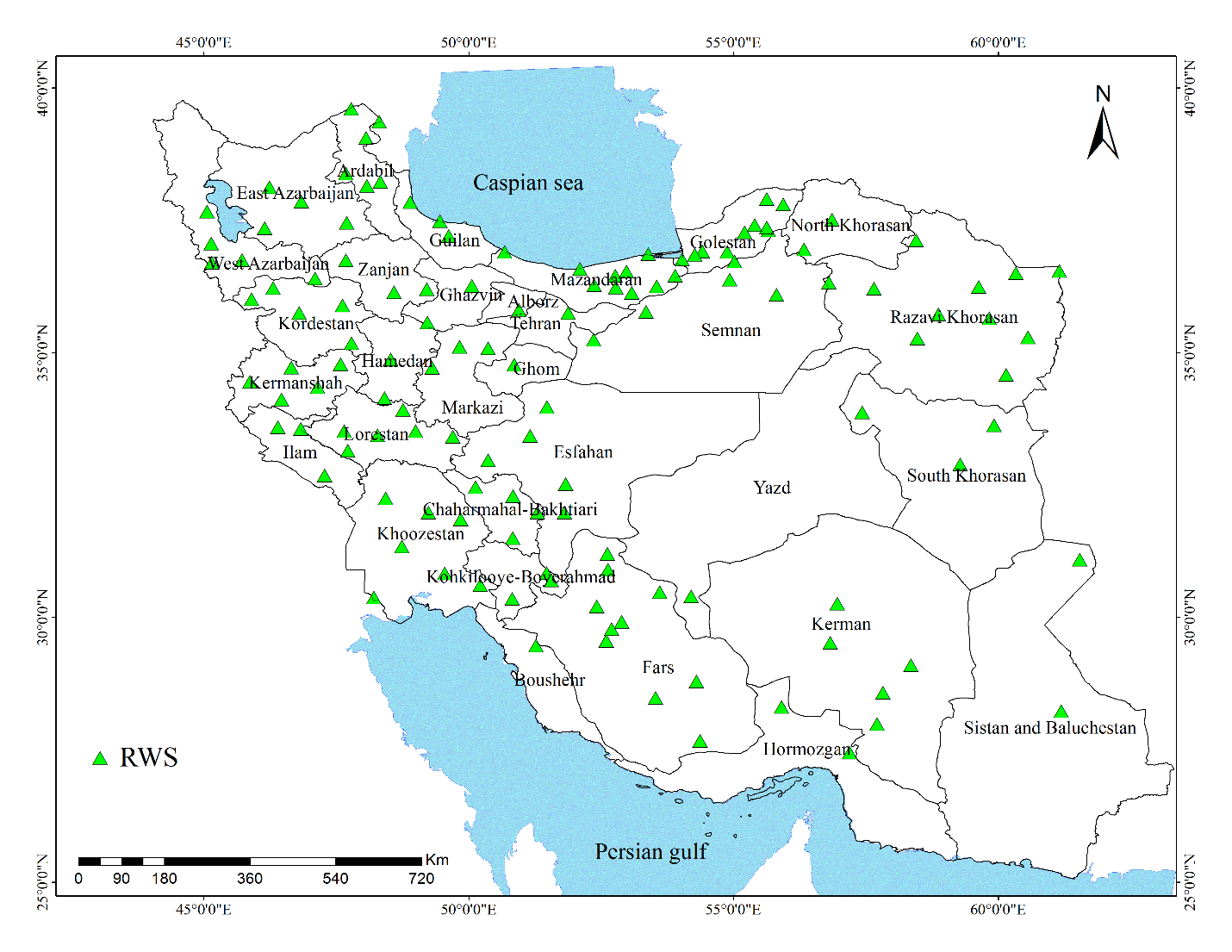 Soil information is a key input to the models for potential yield estimation under rainfed conditions, yet it is difficult to obtain extensive, quantitative, and geo-referenced soil property data for the areas (or regions) of interest. Generic/Prototypical Soil Profiles from HarvestChoice (http://droppr.org/data/map/hc27) which itself is based on information from HWSD and WISE were used (Koo and Dimes, 2010). HC27 already contains 27 soil profiles. The soil profiles in HC27 are based on three criteria that crop models are most responding to, i.e. (i) texture, (ii) rooting depth, and (iii) organic carbon content. By classifying three levels for each category and setting their boundary conditions, Koo and Dimes (2010) generated 27 generic soil profiles (HC27) in formats compatible with DSSAT and APSIM (we didn't derive/create the profiles). The profiles include curve number for calculation of run-off. There was a good agreement between soil texture from HC27 and local, point observations of soil texture. 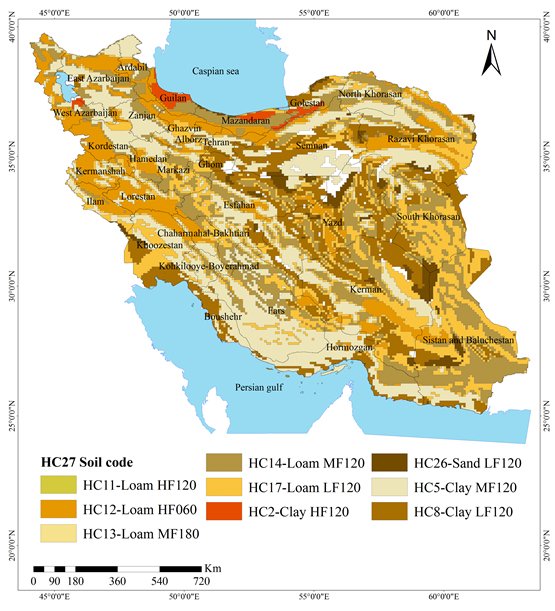 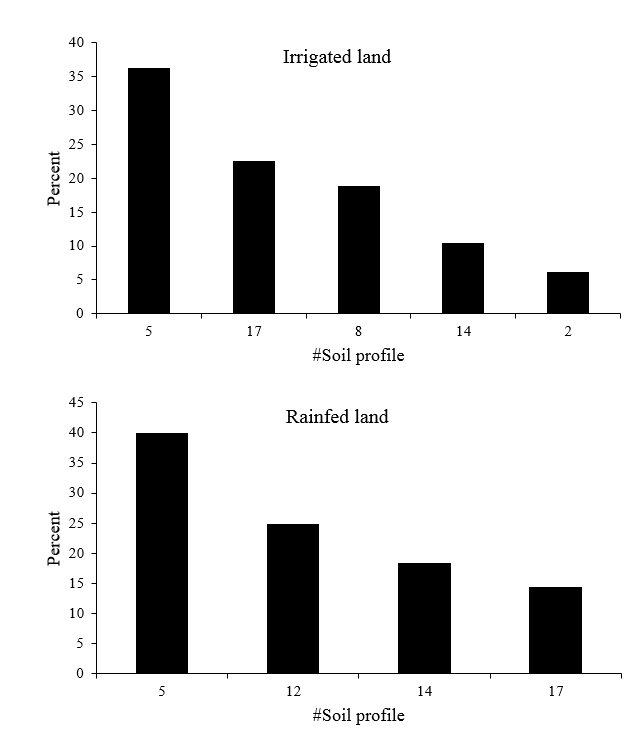 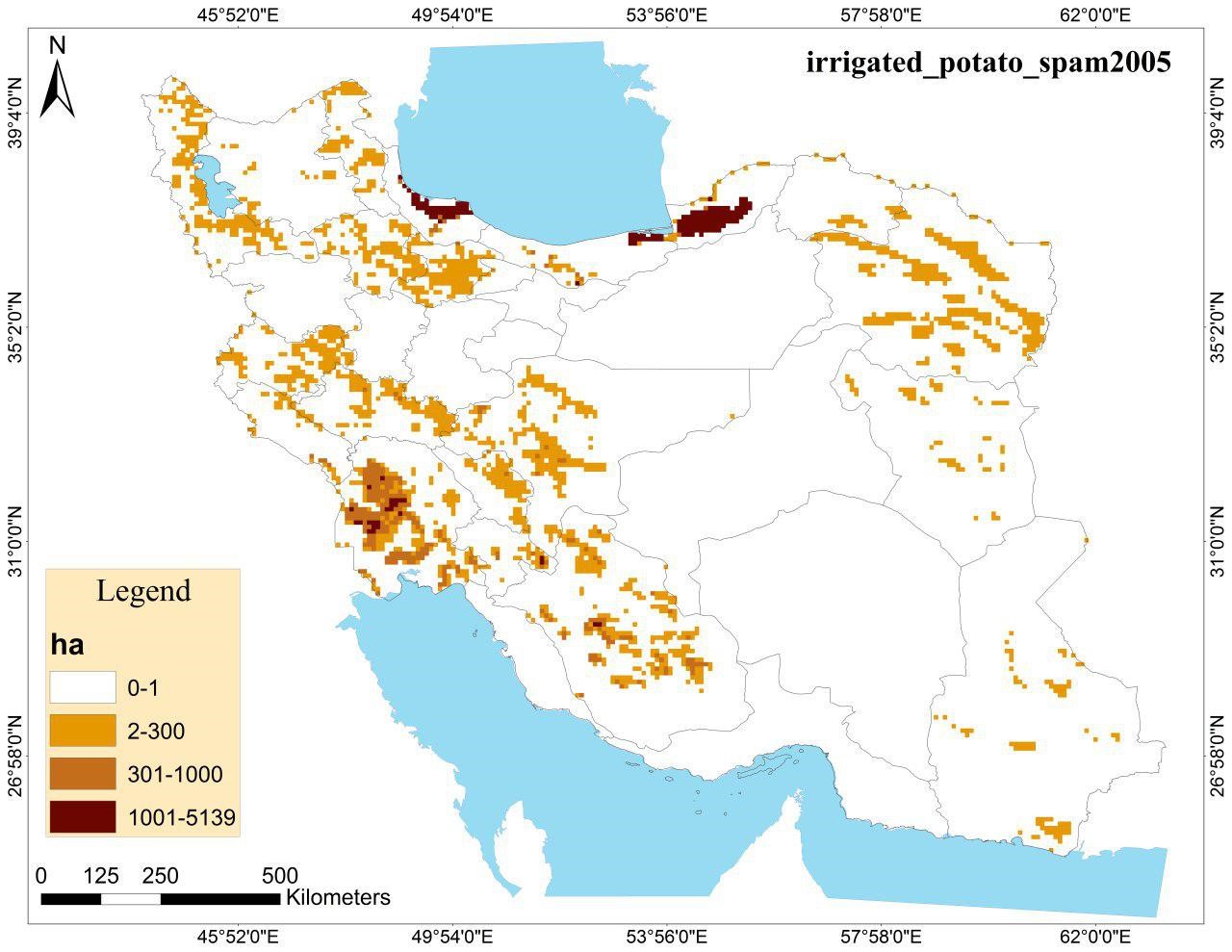 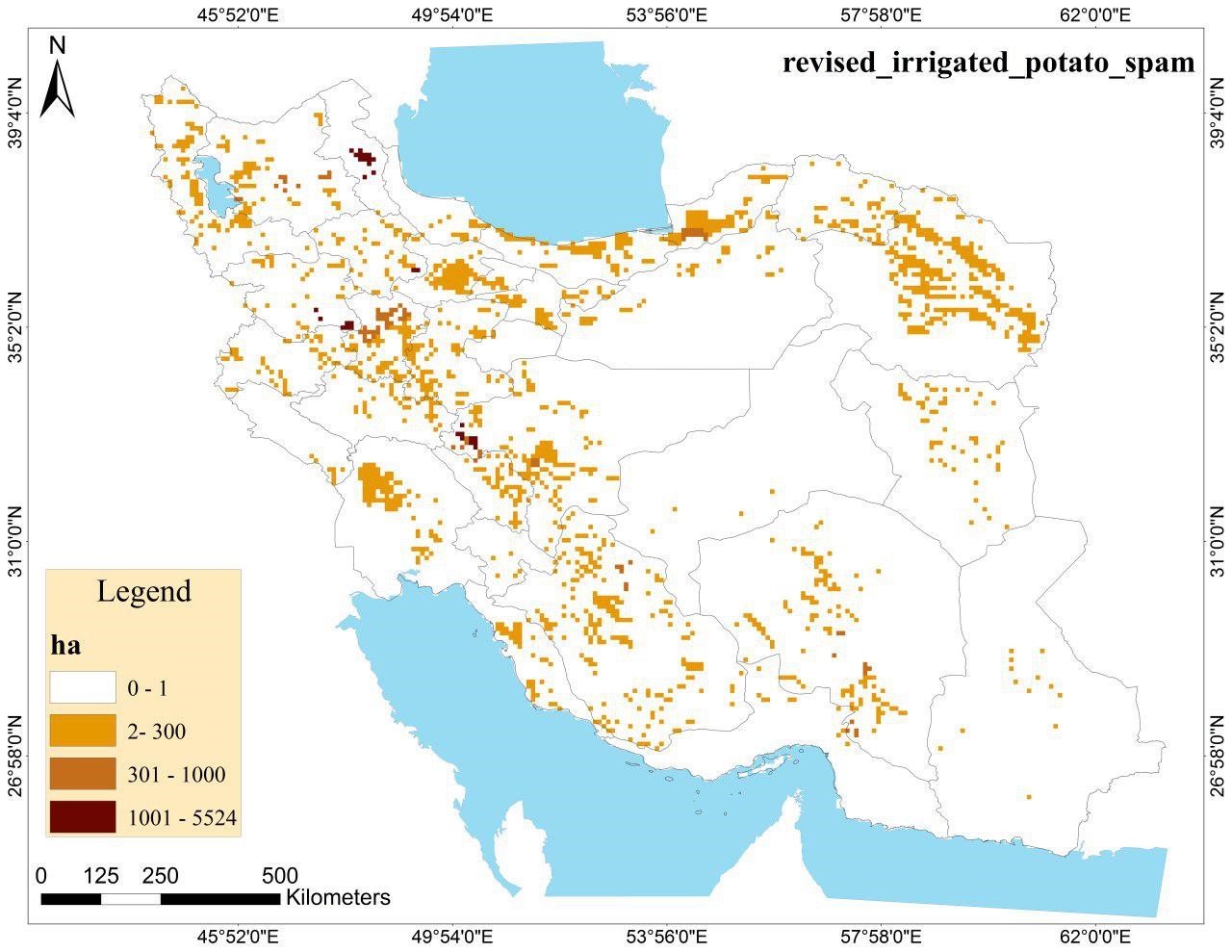 Fig. 9. SPAM2005 crop area map for potato in Iran (above) and revised potato area map prepared for GYGA-Iran (below).

Data of harvested area, production and yield of crops were obtained from the Ministry of Agriculture for the period of 2001-2015, but crop distribution maps were prepared using 2014 to 2016 data. Actual yield for each buffer was calculated as weighted average where weights were county areas in the buffer.

Cropping systems in Iran are wheat or rice based. Wheat based systems can be seen all over the country, but rice based systems are mainly found in the north (Caspian Sea coast) and in some other patchy areas in the country. Depending on temperature, single or double cropping is practiced. In warmer climates with mild winter, double cropping using wheat or rice is dominant, but in regions with cold winters ‘one-crop-per-year' system is used, so that wheat or rice are grown alone or in sequence (rotations) with other crops.

Typical crop management information was gathered from local experts with the help of Agricultural Research, Education and Extension Organization (AREEO) centers and institutes all over the country. Actual yield and potential yield were also items in the questionnaires. For GYGA simulations, typical planting and harvesting dates were used, but for other management factors (e.g. planting density) optimal values were used.

SSM crop models were used for the simulation of potential yields (Yp, Yw). The models are based on T.R. Sinclair's approach in crop modeling. The history of the model development goes back to the 1970s (Sinclair and de Wit, 1976). The models have been developed and tested for wheat, barley, chickpea, lentil, common bean, peanut, cowpea, maize and sorghum (Sinclair, 1986; Amir and Sinclair, 1991; Hammer et al., 1995; Soltani and Sinclair, 2011; Soltani et al., 2013) during the past 40 years. Soltani and Sinclair (2012) presented principles and procedures in developing SSM models.

Not all above mentioned evaluation results refer to Iran's conditions. Thus, for GYGA-Iran, we parameterized and tested the models for all crops using data from Iran. For this purpose, experimental data from major producing areas of these crops in Iran were collected. The data were divided into two parts, one part for model parameterization and the other part for independent model testing. Furthermore, potential yield data from the major producing areas were separately used for model testing for potential yield. Appendix II includes evaluation results for selected crops in GYGA-Iran.

GYGA-Iran was conducted with the support from Gorgan University of Agricultural Sciences and Natural Resource (GUASNR) and Agricultural Research, Education and Extension Organization (AREEO) of Ministry of Agriculture.

It should be noted that data used in (A) and (B) panels are from different experimental treatments under both rainfed and irrigated conditions of main producing areas of that crop in Iran and are not necessary potential yield. 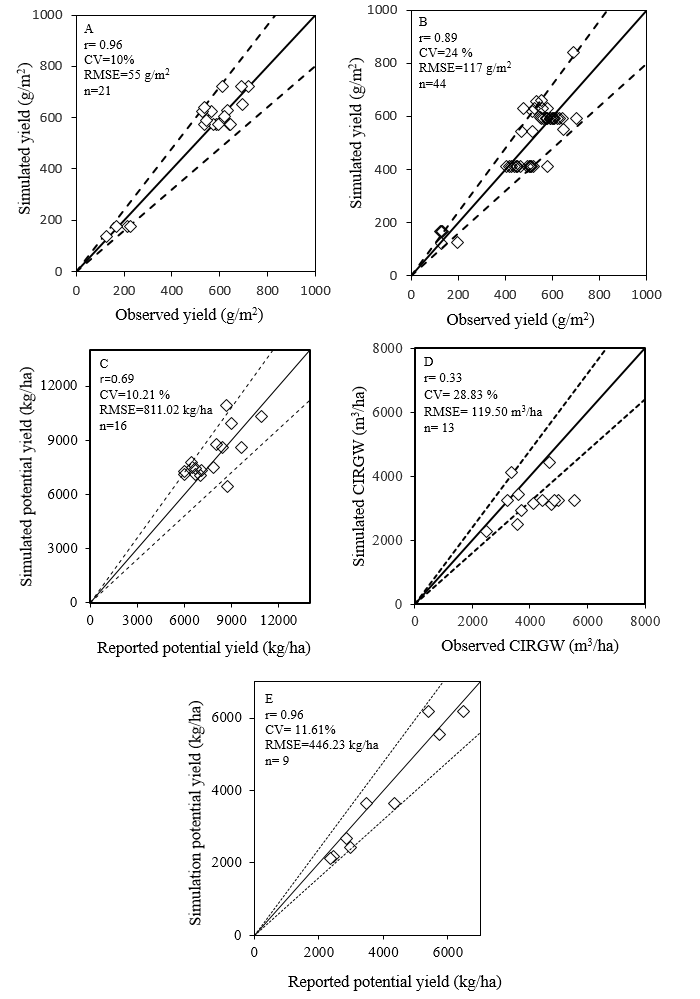 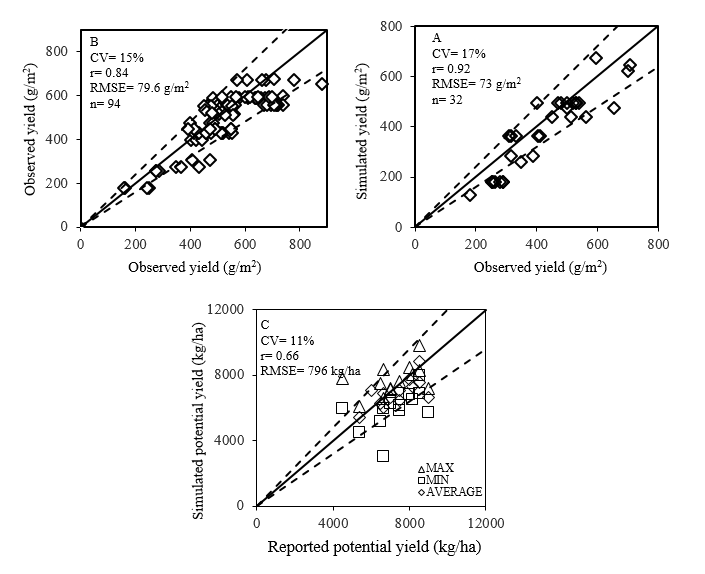 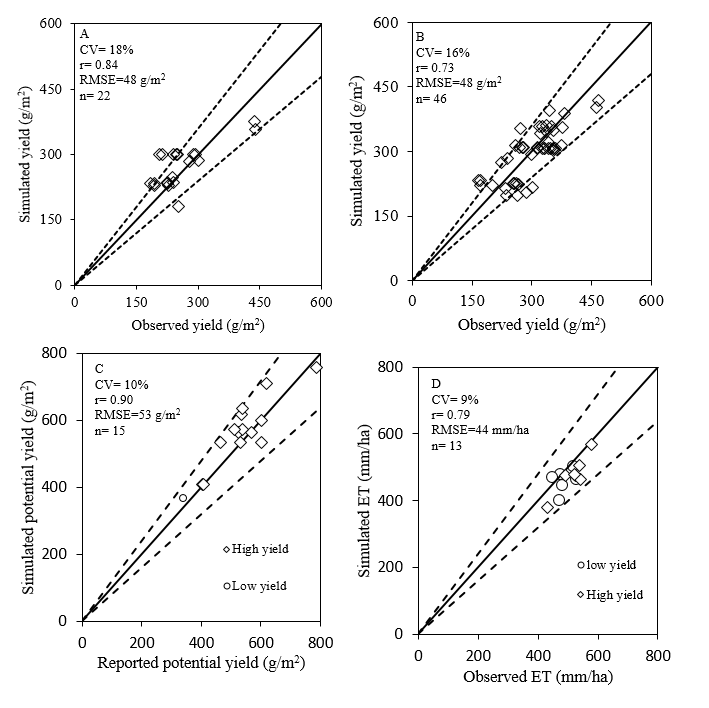 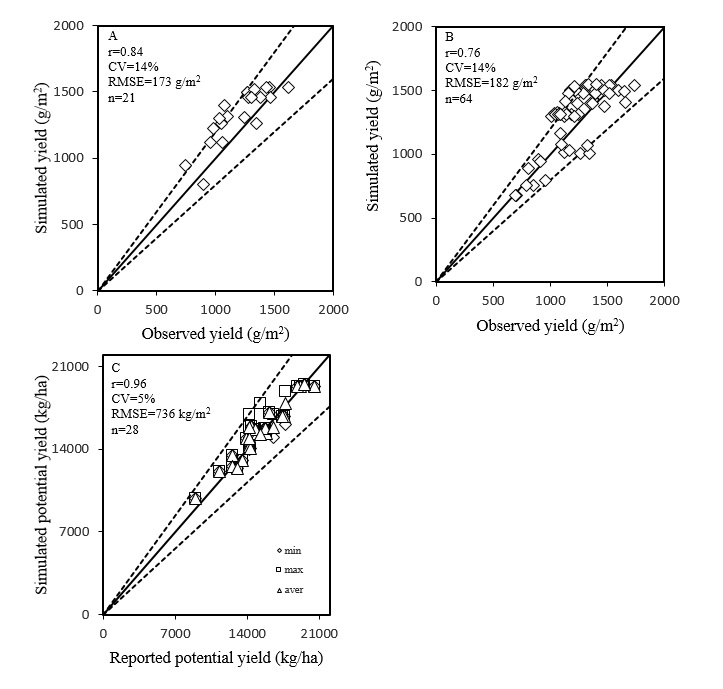 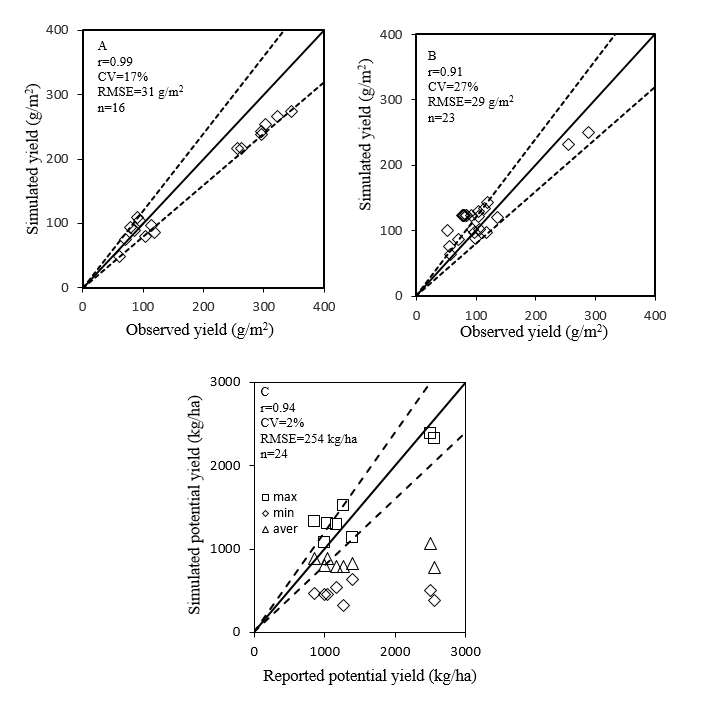 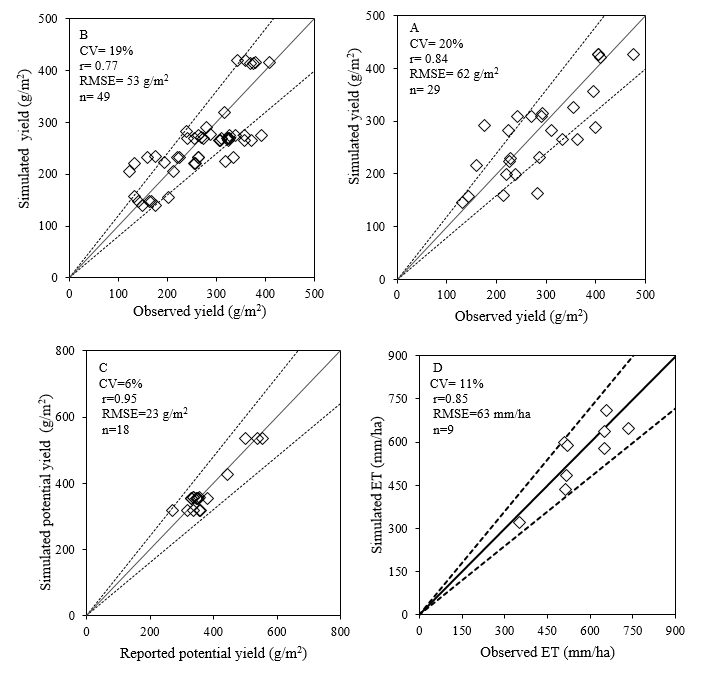 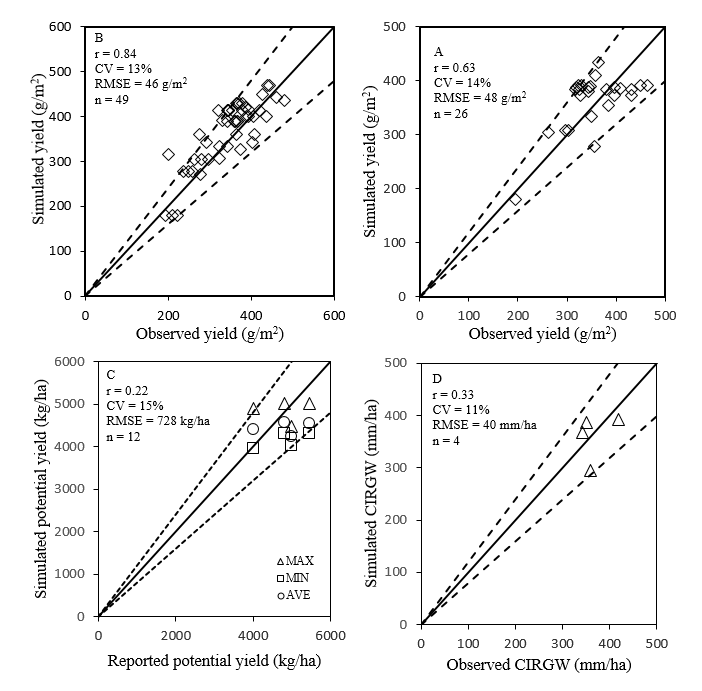 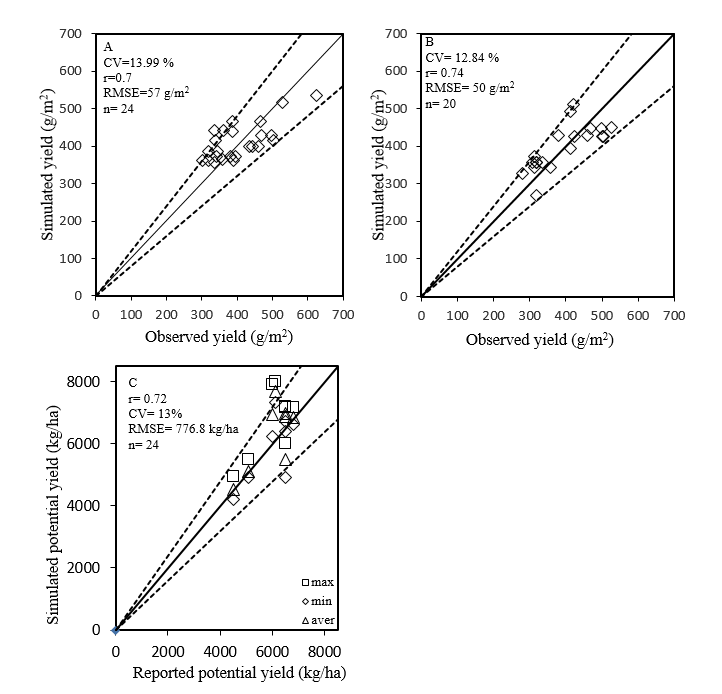 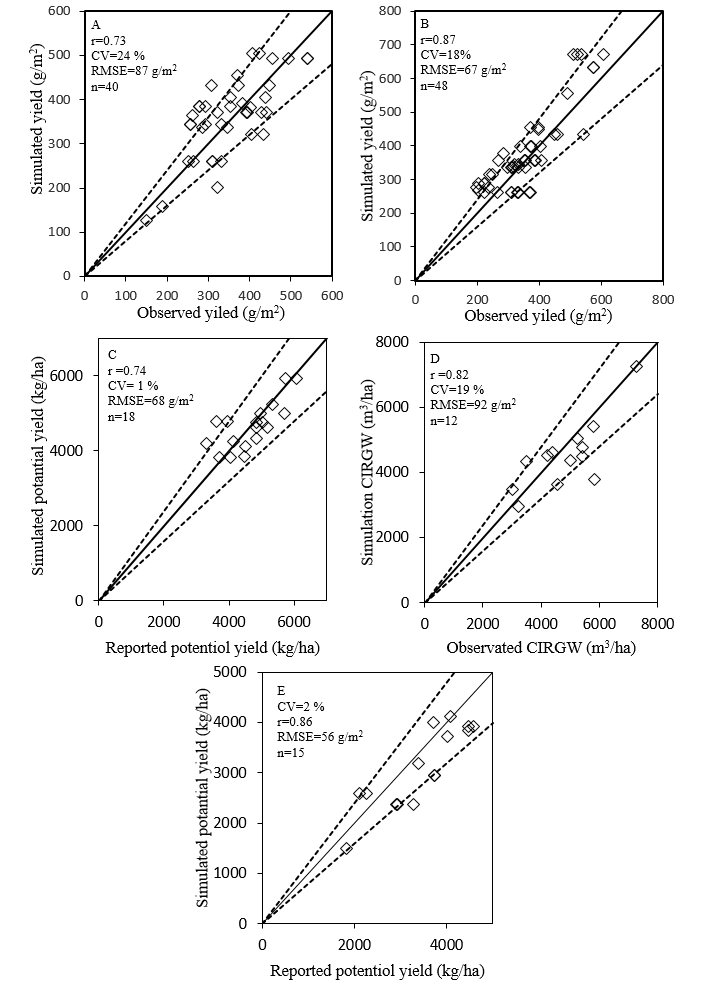 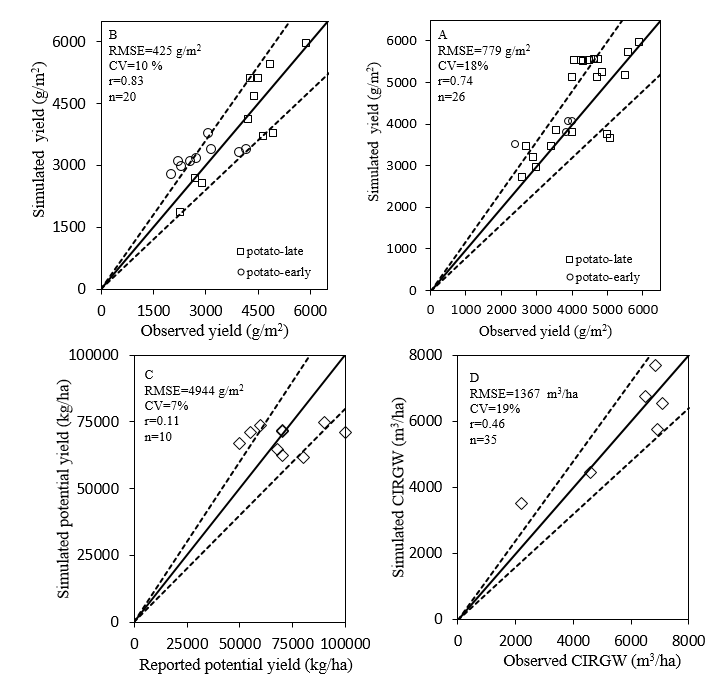 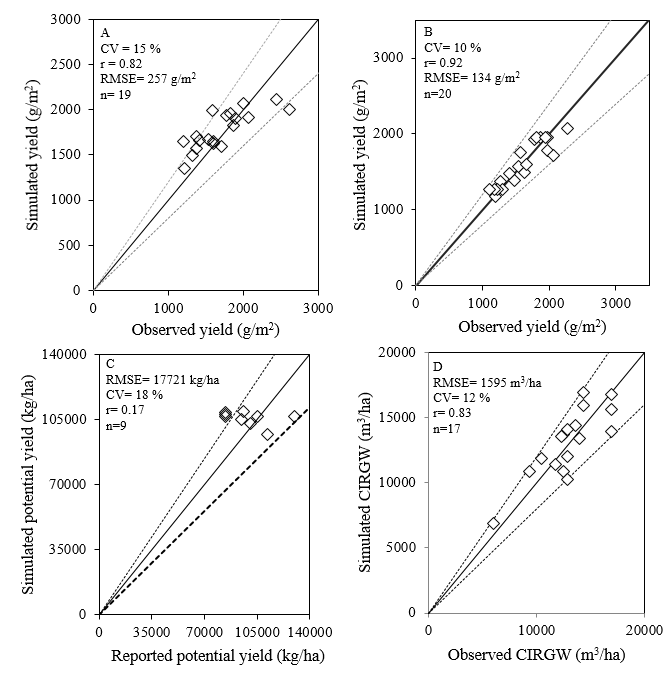 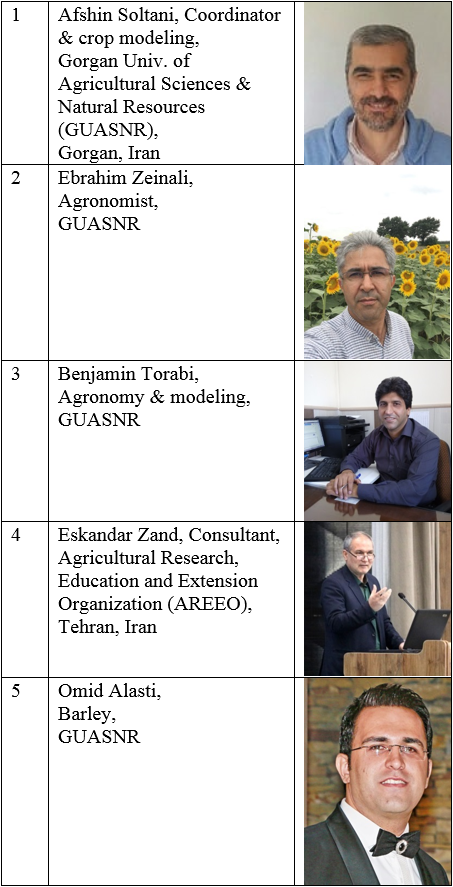 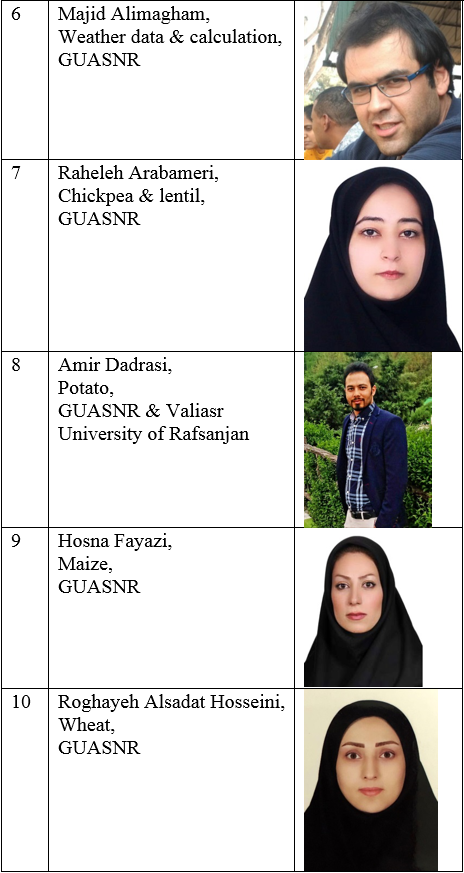 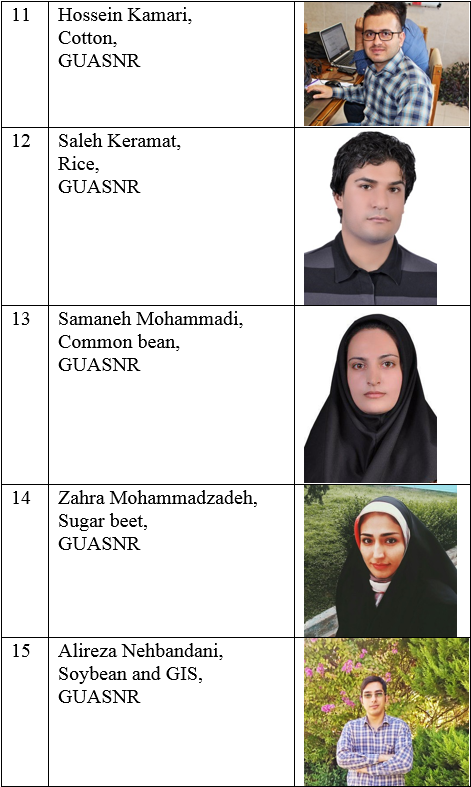 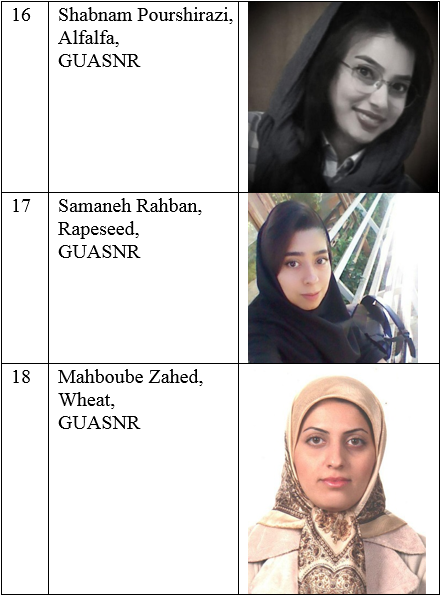