Maize remains crucial for food security in Africa where it is consumed as a staple with intake ranging from 52 to 450 g person-1 d-1 (Ranum et al., 2014). In Africa, maize is grown on 40.7 M ha and is the primary cereal grown in over half of the countries (FAO, 2015-2020). It accounts for 40% of the cereal production in Africa. Since 2010, maize production in Africa (i.e., 67 MMT) increased at an annual rate of 2.2 MMT, reaching 91 MMT by 2020. More than half of the total maize harvested area in Africa is captured in nine Sub-Saharan countries which have been analysed in GYGA (Table 1).

Water-limited potential yield (Yw) simulation was performed using Hybrid-Maize model (Yang et al., 2004). The model was previously validated for its ability to simulate maize yield potential across a wide range of environments in the Corn Belt (Grassini et al., 2009; Liu et al., 2015; Yang et al., 2017) and found to be robust at portraying key G x E x M interactions across a wide range of yields, ranging from 0.5 to 18 Mg ha-1. The model does not require site-specific parameter calibration for simulating yield potential, that is, all model parameters governing photosynthesis, respiration, leaf area expansion, light interception, biomass partitioning, and grain filling rate and duration are generic (Yang et al., 2004). The model only requires specification of GDD to silking and maturity to distinguish among maize cultivars of different length. Simulations utilized daily weather data, soil, and management data. The source of different data to perform simulations for each country were presented in Table 2. 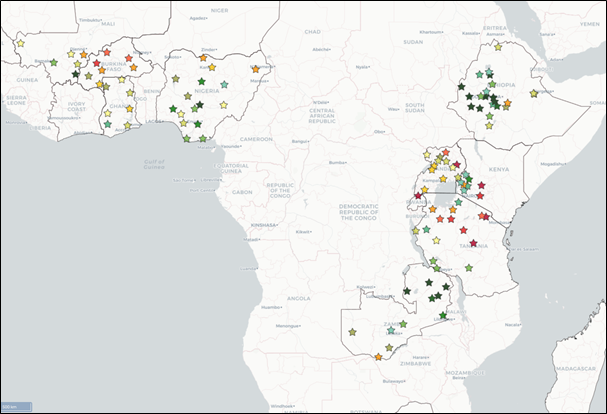 Weather data used for simulations included daily incident solar radiation, maximum and minimum temperatures, relative humidity, precipitation, evapotranspiration. Weather data for selected weather stations were subjected to quality control measures to fill in missing data and identify and correct erroneous values. In the case of stations with only a few years of weather data, long-term weather data were generated based on correlations between measured weather data and NASA-POWER maximum and minimum temperatures (Van Wart et al., 2015). In the case of solar radiation and rainfall, the data from NASA-POWER were used without any correction (NASA, 2022). In cases in which RWS have no measured weather data at all, referred to as “hypothetical stations” (Table 3), uncorrected NASA-POWER data were used for all meteorological variables needed for simulation.

Soil data, including soil depth and soil texture, was obtained from the AFSIS[1] (Leenaars J.G.B., 2018) for each major agricultural soil type in the RWS buffer. Initial moisture status for both topsoil (top 30 cm) and subsoil at sowing was calculated dynamically for each RWS considering the water balance from harvest time of previous crop assuming a specific soil water content at that time (Guilpart et al., 2017). For each RWS, simulations were done for each main soil type and then weighted by their relative proportion to retrieve an average Yw for the RWS.

The simulations were done under water-limited conditions, assuming no limitations by nutrients and no yield reductions due to incidence of weed, insect pests, and pathogens. So, plant density and sowing date within the RWS were the main management input data needed to run the model. The optimal maize plant population density for each location was determined based on the relationship between plant population and seasonal water deficit developed for US maize (Grassini et al., 2009) as explained by Guilpart et al. (2017). Sowing date was dynamically simulated for each year based on maize sowing window as reported by country agronomists for each location, with the exact date of sowing determined dynamically from the onset of precipitation (Fig. 2). Briefly, an algorithm calculates the amount of cumulative precipitation for seven consecutive days into the sowing window. The last day of this period resulting in more than 20-mm cumulative precipitation was considered as the sowing date. If there was no consecutive seven days with at least 20-mm precipitation event within the sowing window, the last day of the sowing window was used as the sowing date.

In Hybrid-Maize, default coefficient values are assigned for crop growth, respiration, and photosynthesis parameters. Here, the default parameter coefficients are used for simulation across all RWS. For crop maturity, total GDD (growing degree days, or growing degree units) the crop takes to reach physiological maturity was used as specific input for each RWS based on the information on flowering and maturity reported by country agronomists (Table 3). 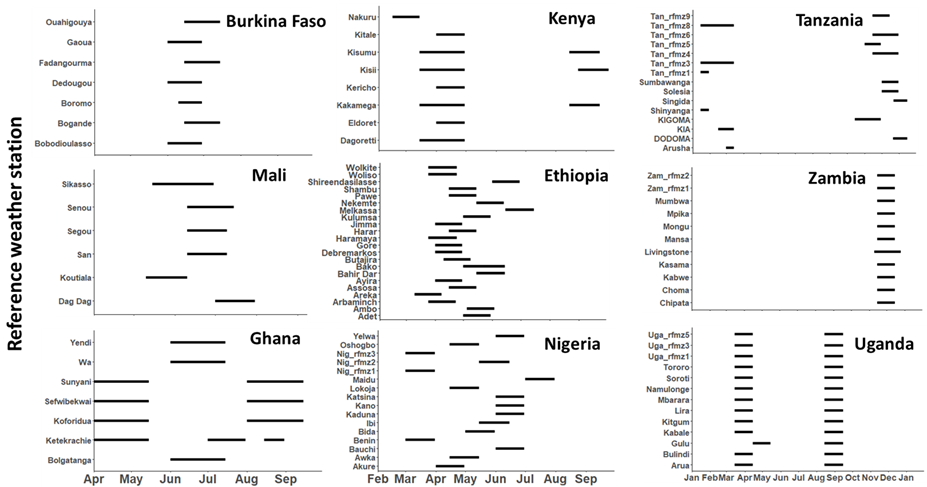 Figure 2. Sowing window for rainfed maize in each reference weather station (RWS) in nine Sub-Saharan African countries. The information for each RWS are presented in Table 3.