Yield gap estimates are made at several spatial scales, from specific locations within important crop production regions  (i.e. points at locations with large harvested crop area density and an associated buffer zone), to climate zones (CZs - defined by growing degree days, temperature seasonality, and aridity index), to a national average. For relatively large countries, only crops with total national harvested area of >100,000 ha are evaluated in GYGA. For smaller countries also crops with <100,000 ha are evaluated in GYGA. The underpinning principle is to select CZs and specific locations (points) and associated buffer zones within these CZs that best represent how a given crop is produced in terms of weather, soils, and cropping system. Cropping system information focuses on the proportion of the harvested area, the cropping intensity and some aspects of management (e.g. sowing date and cultivar maturity) at each of these different spatial scales. Justification for this approach comes from recent papers by van Ittersum et al (2013), Van Wart et al (2013a), Grassini et al. (2015) and Van Bussel et al. (2015). The points are defined as locations with weather data. Buffer zones of selected points with weather data include an area within 100 km of the weather station point, with a focus on harvested crop area within that buffer zone. Thus, polygons that define buffer zones are either circular with 100-km radius if the entire buffer fits within the CZ in which it is located or irregular and "clipped" by CZ boundaries if it doesn't.

Within these buffer zones, data are collected for the most prominent soil type x cropping systems combinations for a given water-regime—either rainfed, irrigated, or both if there are significant areas under both types of water regime. For a given buffer zone, Yp and/or Yw are estimated by simulation using the weather data and information about soil types and cropping systems as input to a crop model. Upscaling moves from buffer zones (if there is more than one buffer zone within a CZ), to CZs, to sub-national and national. This approach requires flexibility as to source of weather data because selected points with weather data should be well within the main cropping areas within CZs with large production areas. In cases where good quality weather stations of at least 10 years are lacking, generated 20-yr weather data from a minimum of 3-yrs actual weather data are the second best option (Van Wart et al., 2015), or derived gridded weather data (last option). Because detailed data on cropping systems and soils are required for each location, one goal of the selection protocol is to minimize the number of points and associated buffer zones needed within a country to obtain a robust estimate of Yp and/or Yw.

Within a country, identify CZs with >5% of total national harvested crop area for the crop/water regime (irrigated or rainfed) in question. These CZs are the "designated" CZs (DCZs) for yield gap assessment of that crop/water regime in that country. Following this approach the selected DCZs typically contain more than 50% of national crop area.

(c)  The final RWS set. Existing and hypothetical weather stations selected in steps 2a, 2b, and 2c become the RWS for a specific country/crop/water regime (irrigated or rainfed) combination. The set may contain only existing weather stations or it may contain both existing and hypothetical stations. In all cases, however, harvested area within buffer zones is not double-counted. In most cases, a surprisingly small number of RWS is required to achieve 50% coverage of national crop area (Tables 2 to 9) because production of a given crop is concentrated in a few major zones of production. For a few countries and crops, however, production is highly dispersed or topography is not homogeneous such that there are a large number of small CZs. In these cases final total harvested area within buffer zones of selected RWS may not reach 50% coverage. In cases where 50% coverage is not achieved using the above methods, it would be possible to add additional CZs with <5% national crop area and weather stations with <1% national crop area if there is time and resources to do so.

Minimum weather data requirements are explained in step 2a. For countries and crops in which there are not adequate numbers and distribution of existing weather stations, we will ask country GYGA country agronomists to search for existing weather data near the location of hypothetical RWS. Maps with preferred locations of these hypothetical RWS will be provided to country agronomists. Sources of data can include: (i) weather stations located at experimental field research and crop breeding sites used by universities, national agricultural research institutes, international CGIAR centers (e.g. ICRISAT, AfricaRice, IITA, CIMMYT, IRRI), and (ii) weather data obtained by collaborating projects also seeking actual weather data (AgMIP, CCAFS, HarvestChoice, etc). The following preference hierarchy shall be used in identifying additional weather data sources:

(d)  Last option: Where no weather data are available, we will use the most appropriate source of gridded weather data such as: the NASA POWER (https://power.larc.nasa.gov) and TRMM datasets (http://trmm.gsfc.nasa.gov/), containing satellite-based rainfall data.

Collection of data on cropping systems and soil type is tightly focused on the RWS selected by steps 2a, 2b and 2c above. Unfortunately few countries collect and report data on cropping systems at sub-national scales. Hence, in many cases country agronomists will be the "expert" source for estimates of the proportion of total harvested area within a RWS's buffer zone represented by a given cropping system x soil type combination. Only the most important cropping systems x soil type combinations will be considered. Site visits to the RWS locations allow collecting information about the area distribution of these systems. Soil parameters will be obtained from existing soil maps and derived crop simulation model parameters (ISRIC-WISE or if available, national maps). Information on soil properties is required to estimate Yw in rainfed systems (not needed to estimate Yp of irrigated systems). Essential soil properties include: texture, depth of root zone, and slope. Essential information on cropping systems includes: cultivar, plant density and sowing date. Find the GYGA data sheets here. These can be used to collect local crop management data.

The preferred sources of data for actual yields are sub-district or municipality data that is as congruent as possible with crop area distribution within RWS buffer zones. For irrigated crops, the most recent 5-year mean for actual farm yields is preferred, rather than a shorter or longer time series, to avoid an atypical value that may occur in an unusual year and to avoid confounding effects of a yield time trend due to adoption of improved technologies (van Ittersum et al. 2013). For rainfed crops, the most recent 10-year mean for actual farm yields is preferred due to greater year-to-year variability in yield. Where such yield data are not available, actual yield data from household surveys can be used (e.g. those collected by some CGIAR Centers, the World Bank, national agricultural research programs, and other institutions) if they were taken in RWS buffers or similar areas. Where no sub-national data exist near a RWS or roughly congruent with a CZ, GYGA country agronomists may targeted survey led by the GYGA country agronomist, or use the national average yield. Detailed description of preferred methods for obtaining actual yield data can be found here.

Because time-series of actual farm yields at the RWS spatial scale are not likely available in most countries, annual variability in Yg will not be estimated. Instead, Yg will be a fixed value based on average Yp or Yw at each spatial scale and the associated value of Ya. If Ya is only available at a national level, Yg will be estimated by a single value of Ya and will vary only to the extent that Yp or Yw vary at different spatial scales, from the RWS, to CZ, administrative units and nation. 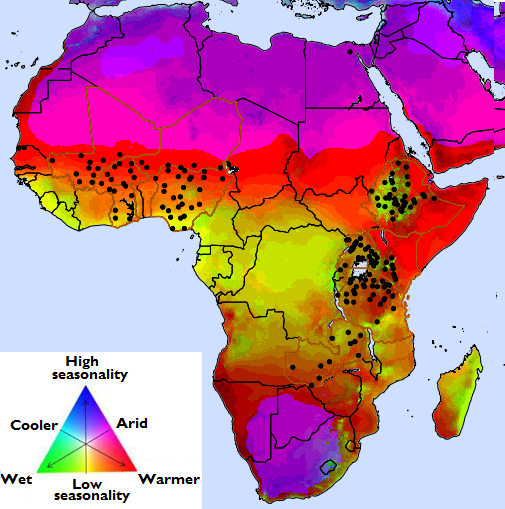